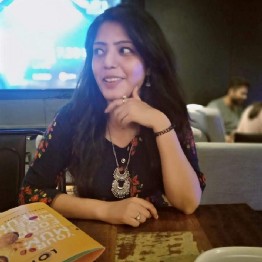 An engineer at the profession is everything but at heart. Just like most Indians, Pudi Ravi Krishna is an engineer. He later discovered his true love for art and became an artist. Being a perfectionist, he always makes sure that he is great at what he does. Coming from a family of farmers, to choose fine arts over Engineering was an unreachable grape to him. Look at the journey of Ravi Pudi on how an engineer turned into a flawless artist, by watching Romancing a Line here.

From the interaction with him, what grabbed most of our attention is when he mentioned a poem written by Robert Frost.

Two friends traveling and one of them is always worried about the path that is not chosen.

And in this context, he mentions that he is the friend who always worried about the options that he couldn’t choose.

He started his designing journey by drawing his thoughts on Inkscape as he wasn’t having an illustrator with him. But his thirst for design knowledge was never-ending. He started improvising himself by gradually adding humor to those drawings. Adding to his commitment, an Email from a famous Times-Now cartoonist made him go beyond what he was doing.

He mentioned how aimless he was until 2015 and how he has done some great acrylics. He then gave us a glimpse of his amazing work. God! These are truly amazing.

Watch the full video here to understand the beautiful perspective behind each of these paintings.

No one, but an artist himself can explain his own work. Listen to Mr. Ravi Krishna talking about his art and the beautiful perspective behind each of these paintings in his own words. He is the guy who proudly says that he has decided his palette with two cartons of stitching threads.

Then he introduced us to his masterpiece — The Brahmanda.

From one of the previous works he always wanted to create a cosmic egg, and this is how it has turned out to be initially.

“Quite a manual and strenuous work,” he says. This is his 2nd iteration of creating brahmanda.

In the 3rd iteration, which is rather huge and difficult, he has used cloth instead of paper for the thread to hold properly.

One thing that every designer relates to is the fact that whatever medium one chooses to present their art, has its own pros and cons as well. After getting into this amazing thread art, our speaker also came to know its limitations. “Drawing objects with thread is a very difficult task and meant for abstract objects like this,” he said.

Ravi also mentioned that there were times when his art medium has consumed him so much that he felt connected to nothing except his thread which he uses to make art. He referred to those moments as his Gandhian Moments. He explained it as an intimate moment between him and thread while he cared about nothing else.

He displayed his first successful work — the cell division. He explains his efforts behind from the very first step which is color choosing. Of course, Rome is not built in a day. This work took a lot of patience and iterations. The work is not highlighted on white canvas so the black canvas which beautifully portrays it is chosen.

An artist always treats his art as a real thing and Ravi here is no different. Seeing it as an organism, he couldn’t let this art flat. He wanted it to be curved up. That’s when the idea of a concave surface bowl came up. “It can be mounted on the wall.” he thought. After researching more, Ravi felt a kadhai would a better place for his aesthetic art.

After successfully completing the “One becomes two”, Ravi started to work on “The Padmavyuham — an inescapable labyrinth” Just like Abhimanyu got stuck in the padmavyuham in the battle of Kurukshetra, humans tend to get entangled in their lives and struggle to get out. This is a visual representation of people not being able to do what they really want to do in their lives. When Ravi used this Mahabharata reference to spill this bitter truth about humans, every one of us related with it.

Ravana, the king of Asuras, has 10 heads and those are often considered as 10 qualities humans have. And Ravi has beautifully portrayed this with his art. We have closed the interaction with this brilliant display.

Pudi Ravi’s journey was never a cakewalk. There were so many hurdles like changing his career, exploring new mediums, and dealing with the limitations of the medium. There were instances where the wind messed up the work just like that. And of course, sitting for hours to complete the work is not a small thing. Overcoming all these hardships and stress and moving forward to what he loves is what we liked the most about Ravi. After all, it’s passion and dedication that matter. We, F1atics are so lucky to learn these three things from this interaction.

1. Creative Courage: A true artist will never fear the hurdles that hurt him on the way. This is what Ravi’s journey shows us. Be it changing the career or learning a new art. If you have true passion inside you, You’ll automatically learn to handle fear. A go-getter attitude is all that matters. With this attitude, you can do whatever it takes to complete art. This is the attitude you need to be a successful artist.

2. Discipline: Art is a form of discipline. A mere procrastinator cannot complete an art. No matter hows many years he sits on it. Having a timeline and sticking to it no matter what is the first step in producing a successful art. When it comes to self-made deadlines, every person neglects the work. Being able to wake up in the morning and working on the art you started without any manager pushing you is the trait of a true artist.

3. Commitment: Being committed to the art you want to make is the biggest task you’re gonna have which working. This is a constant task. There will be many instances where you just want to give up. But sticking to the art despite all the hardships is what it takes to be a successful artist. Yes, it takes lots of time and energy but all you need to do is imagine the output and walk towards it step by step.

You can watch the whole video of Ravi Pudi here on our Youtube Channel: